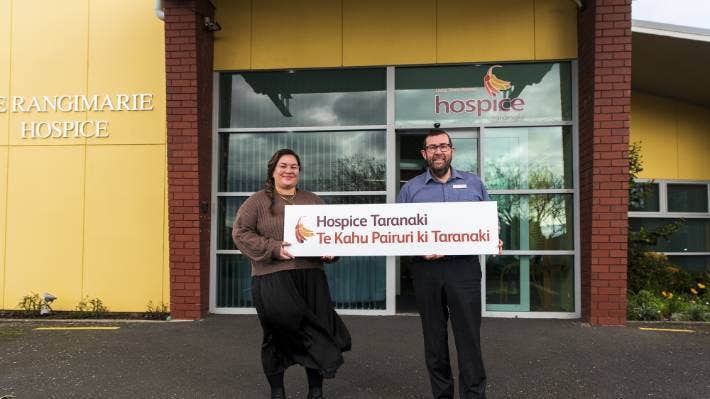 ANDY MACDONALD/STUFF
Hospice Taranaki's Paula King and Paul Lamb say its new signage also reflects changes being made within the organisation to be responsive to the needs of Māori.

A significant change in Hospice Taranaki history is coming in the form of five words, but their purpose goes to the heart of its wish to connect better with Māori.

From next month, the charity will start installing its new signage, which for the first time includes its te reo ingoa (name), Te Kahu Pairuri ki Taranaki.

Kahu is a garment worn for warmth and comfort, while pairuri translates to compassionate care. Collectively, the full Māori name can mean to wrap holistic care around the person, and their whānau, before, during, and after the end of their life.

She hoped Māori around the region would see the changes taking place within Hospice Taranaki, providing a chance to partner with tangata whenua and kōrero around end-of-life care, and with a view services could be co-designed as a result.

Chief executive Paul Lamb said he knew “it’s got to be more than words”.

He said the bilingual signage was part of an enhanced commitment within the service to the Treaty of Waitangi, and its aim to be more responsive to the needs of Māori.

Lamb said the organisation had been “largely monocultural” in the past, but recognised the need to shift strategically to not only align with the wider Government-led health reforms, but as a way to build stronger connections with the Taranaki community and its hauora Māori providers.

“Everything from our name downwards needs to reflect that.”

The ingoa (name) was first provided by registered translator Ngaringi Katipa, in consultation with te reo expert Professor Timoti Karetu and Hospice New Zealand, in 2019, before consultation began with iwi groups, hospice staff and others in the region.

The new signage will go up at its David St premises in September.