The following is a brief outline of the development of Hospice and Palliative care in Taranaki.

1985: February a Hospice Steering Committee was formed following a public meeting in New Plymouth, working towards setting up a hospice service in New Plymouth.

November public meeting was divided on the setting up of a charitable trust and the Steering Committee was disbanded.

1988: The hospice cause continued to be promoted by a new group called The Friends of Taranaki Hospitals Society. Several major fundraising events were held including a dinner with Sir David (then patron of Hospice NZ) and Lady Beattie in attendance.

1992: Charity Concert with Dame Malvina Major as the main artist was held.

Hospice Steering Committee established on April 9th with representatives from the Friends Society and the Cancer Society.

In August a discussion booklet "The Proposal" for a Hospice facility was produced.

1993: On May 20th the Taranaki Hospice Foundation was incorporated as a charitable trust.

At the Friends of Taranaki Hospitals Society AGM, the society reported a significant fund had accumulated from community events and donations. It was resolved to support the objectives of the newly formed Taranaki Hospice Foundation and the society went into recess.

1992-94: Planning and discussions continued in an environment of major change within the health sector.

July - At a meeting with the Regional Health Authority it became evident that they did not favour a stand-alone hospice inpatient unit. The policy then became an inpatient unit to be located within Base Hospital with the service contracted out.

1994: The first co-ordinator of volunteer support services was appointed with a 60 strong team.

1996: Te Rangimarie hospice opened in what had been Ward 21 of Base Hospital. A six bed in-patient unit had been refurbished in a joint venture between the Hospice Foundation and Taranaki Healthcare.

Opportunity shop starts operating from back room in Iona House.

1998 - 2001: Demand and use of palliative care continued to grow in Taranaki with the deficiencies of the "converted hospital ward" Hospice beginning to show. 2001: 'Night to Remember' dinner party fundraiser launched.

Day-care program extended to Fridays as well as Wednesdays.

Expansion of the New Plymouth HospiceShop

2009: Hospice Taranaki implements the Liverpool Care Pathway in Te Rangimarie as the standard of care for Taranaki residents in the last days of life.

Grease stage production at the TSB Showplace raises more than $110,000

2014: Peter McDonald was made Life Member

2015: HospiceShop Stratford moved to new building on the corner of Regan and Miranda Sts. (8th June)

2016: HospiceShop Waiwhakaiho moved locations, but only by a few doors. Much bigger premises allowing own sorting.

February: New Service Initiative - part of planning for the "Baby Boomers" A small team that focuses on the Aged Care facilities in Taranaki

December: Mary McCaffery retires after 18 years with Hospice as the Receptionist

2018: August opened a 'pop-up' Waitara HospiceShop to test the viability for a retail shop

Waitara HospiceShop now one of five.

Trade-me (HTI) has become a good source of funds.

2020:  Due to Covid-19 pandemic Te Rangimarie Hospice was closed until June and all nurses deployed into the community.  The HospiceShops were also closed.  Shops re-opened in May after being closed for 8 weeks.  Fundraising events that could be postponed were postponed until later in the year.

Telemarketing campaign that began in Level 3 was very successful.  Grateful thanks to the community for their support.

2021: The year had started so well holding the inaugural Teeing off for Hospice event with George MacArthur at the Westown Golf Club - raising very close to $30,000

HospiceShops had changed the opening hours returning to closing at 3pm with Stratford and Waitara HospiceShops not open on Monday's (Waitara had never opened on Mondays). No donations were accepted at the Westown HospiceShop and the Borrell Ave Warehouse accepts donations 7days under new manager Kay Terry. Lisa Andrew resigned as the Waiwhakaiho HospiceShop following several successful years.

Then due to a Covid-19 outbreak in NZ we went into a Level four lockdown in August. This again meant a closure of the HospiceShops, Warehouse and changing the way we worked with a lot more telephone consults. Doctors and nurses in PPE (Personal Protective Equipment) to make home visits. IPU did not close with three patients and a family member with them in their room. 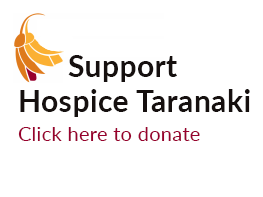